Today has been amazing.

After sailing wing and wing under the drifter for a while, the wind died down to slick flat water

We were motoring in flat water, just as Isaac’s shift came to an end. A gentle breeze came to life, barely rippling the face of the water.

We trimmed the main, leaving in the reef, and set the Genoa on a close reach.

With the engine silent now, we slipped through the water effortlessly at over 3 knots. In all of my sailing I’ve never seen the like of it.

The ice broke any fetch to our windward. Leaving silky seas under our hull and every bit of power in the cloth. The sails drew us forward, uninhibited by waves.

We were sailing up wind and 3 knots, in a silent breath of wind, on a 2 inch sea state. Weaving in and out of ice flows at will.

As the wind backed to our Starboard we trimmed for a beam reach. Now at over 4 knots, under 70 percent sail on flat water. In pure silence.

Only the groaning of breaking ice, and our mixture of excited murmurings broke the silence.

Jason deployed a kite from the stern and sent up a camera, which was fascinating to watch. The camera was focused on us, but a hundred yards in the air to our leeward. Showing the ice around us as we slipped through the flows. 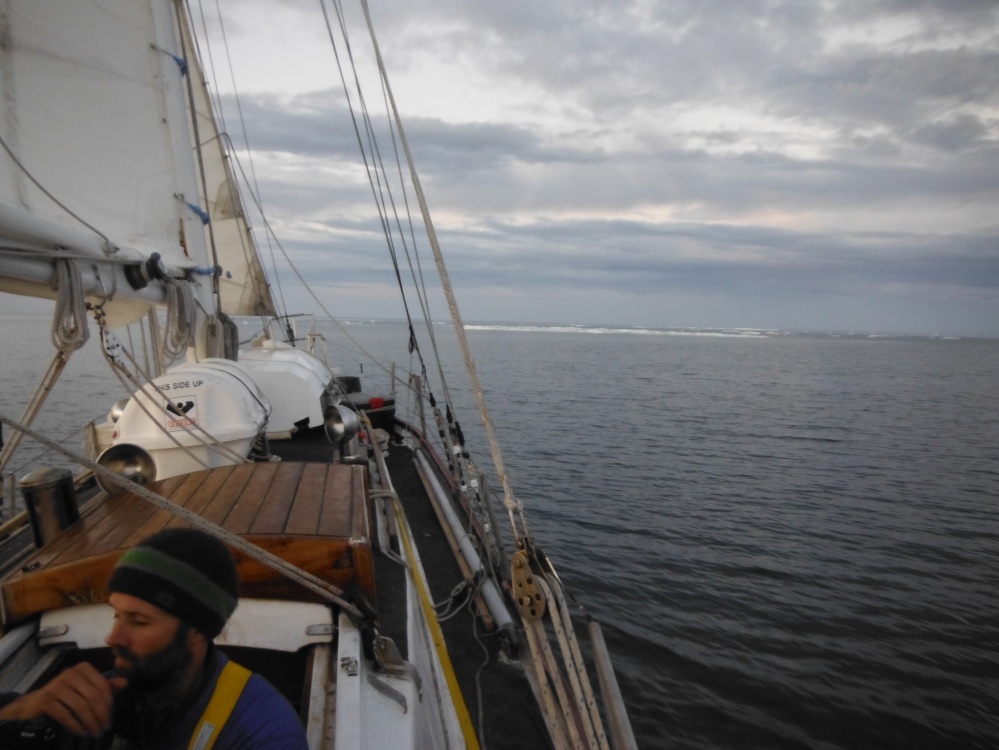 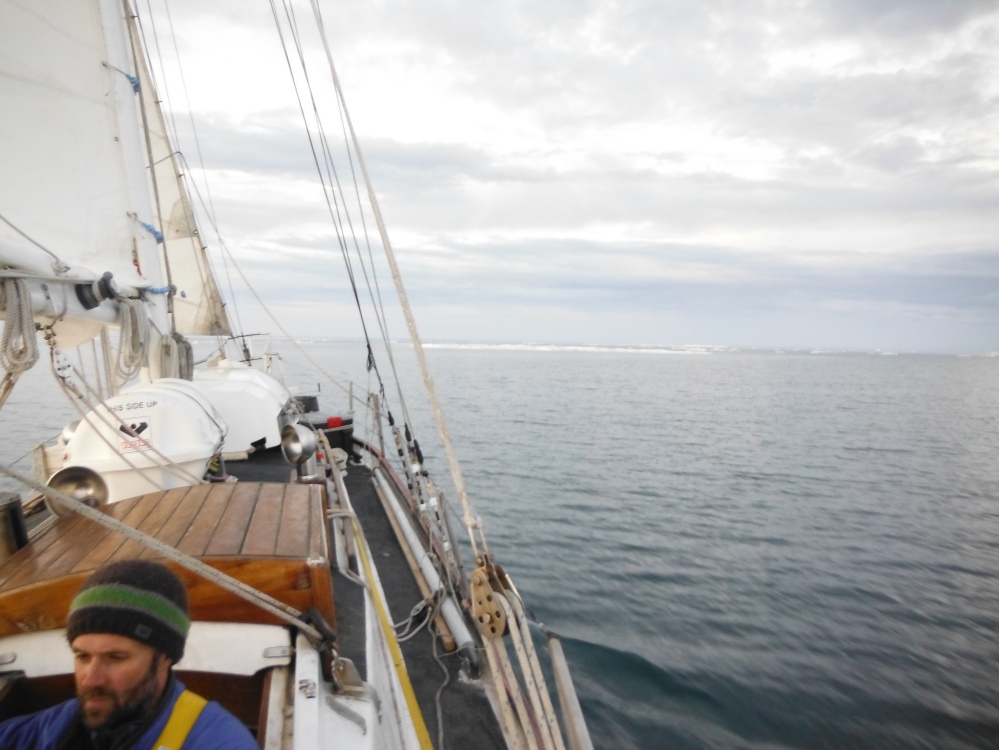 All hands were on deck. Taking in the excitement and magic of it all. When just to our windward, I spotted a perfect little harbor for Empiricus.

A notch, melted into the ice, looked to inviting to pass up and the massive cake called out. Beckoning to be explored.

Now abeam of the notch, I steered her head to wind, as the crew doused the gently luffing main and genoa.

We slowly drifted into the flow, and came to a gentle, yet sudden stop, as the bobstay cut a groove into the ice.

Our homemade grapple hooks worked only marginally to secure us to the flow. So Ice screws were inserted as we one by one made our way onto this strange floating surface.

The shotgun was brought out to the flow, in case of Polar Bears as we wandered around in amazement.

Like children enjoyed Frosty the Snowman, in the childhood ferry tale. We played and frolicked as the edges, gave way around us. Making splashing and hissing sounds as it separated just yards away. 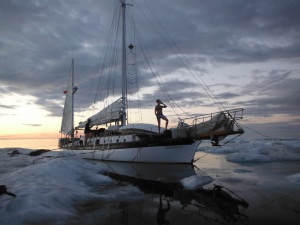 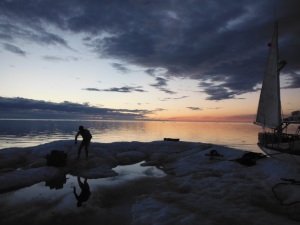 With the sun, casting an orange yellow glow, just above the horizon, we each took a dip in the crystal clear water. Leaping off the bowsprit into the frigid icy hole, just of the Starboard Bow.

Plunging into a dark hole in the ice, to look up at blue surrounding you, while returning to the surface, is a shockingly beautiful experience.

We lit a fire on the ice soon after, and sipped lightly on some rum. Each making our own toasts. No cameras, no recordings. Just us, in the moment with the platform rapidly dissolving beneath our feet.


As the flow changed and broke apart, the ice began surrounding our rudder.

It was time to go. We quietly cut loose, shoved off with an Ice pole, to get our rudder in clear water, and backed away.

Not a breath of wind remained, as we had sailed all the wind to be had.

There are memorable days and times in our lives. Then there are surreal, dreamy leaps of overwhelming excitement and beauty. These are found in the unexpected places at unlikely times.

They cannot be fully explained through any media. They cannot be downloaded, or captured and broadcast in their entirety. They must be experienced by your every cell. By our own eyes, ears and every hair on our heads.

We must seek these moments out.

6 thoughts on “A surreal passage to a melting Island.”

Sailing, yachts, adventure and sailing around the world!

A site dedicated to purpose filled life, exploration under sail and the philosophy behind it all

A must-have work for enthusiasts on sextant construction, restoration, repair and adjustment

Home is where the empty suitcase is...

Writing and photography of wild lands and seas

Hitchhiking through the Northwest Passage

A blog by avid beginners.

Linking natural and cultural treasures of the Mediterranean

Foods from the fjords of Norway

one small town girl muses on the view from the Hubble

living well off the beaten path